The above picture was taken at a wedding in Jacksonville, Florida. This is a example of traditional Gujarati meal. Thali means collection of various dishes including sweet and sour to taste. Typically Gujarati Thali is served in a big round stainless steel plate with several small bowls for different dishes as shown in the picture to the left hand side.

The above picture of Thali consists of (clockwise):
Shirkhand: Made of yogurt, sugar, and safforn
Undhiyu: medley of all the vegetables such as beans, potato, egg plant and others
Potato and Corn Sabzi
Ameri Khaman: popular snack made of chick pea flour and sev
Cucumber and Pineapple kachumber: healthy green salad
Fired papad: made of  lentils flour and spices
Farsi Puri: Made of whole wheat flour and may be substituted with soft puffed puri.
Patra: Made of colocasia esculanta leaves, chickpea flour, spices.
Pickle
Pulav with vegetables.
Kadhi(outside of the plate).

Further, Gujaratis’ serve desert as an appetizer instead of being served in the last. In the end freshly churned buttermilk is served known as Chaas. 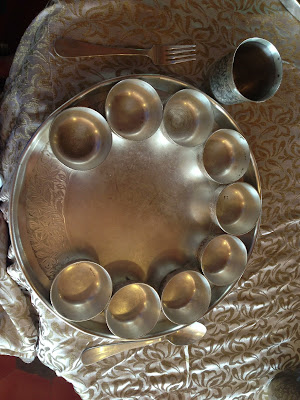