We all know that the goodness of yogurt and its prebiotics are healthy for the body. In the state of Gujarat, India, the summers are very hot and the humidity is very high, so yogurt is a must to eat with meals.  One of the most popular items in all of Gujarat is Shrikhand. It is sweet in taste and is eaten with Puffed Puri.  It is very easy to make and it stays fresh for 3-4 days in the refrigerator. It also freezes well.  For parties and fun events, it can be made ahead of time.

How to Prepare:
Tips: 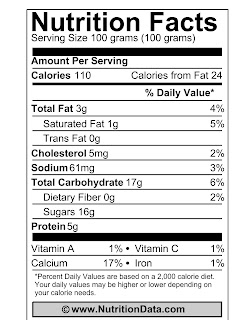 From: AskDrSears.com
1. Yogurt is easier to digest than milk. Many people who cannot tolerate milk, either because of a protein allergy or lactose intolerance, can enjoy yogurt. The culturing process makes yogurt more digestible than milk. The live active cultures create lactase, the enzyme lactose-intolerant people lack, and another enzyme contained in some yogurts (beta-galactosidase) also helps improve lactose absorption in lactase-deficient persons. Bacterial enzymes created by the culturing process, partially digest the milk protein casein, making it easier to absorb and less allergenic. In our pediatric practice, we have observed that children who cannot tolerate milk can often eat yogurt without any intestinal upset. While the amount varies among brands of yogurt, in general, yogurt has less lactose than milk. The culturing process has already broken down the milk sugar lactose into glucose and galactose, two sugars that are easily absorbed by lactose-intolerant persons.
2. Yogurt contributes to colon health. There’s a medical truism that states: “You’re only as healthy as your colon.” When eating yogurt, you care for your colon in two ways. First, yogurt contains lactobacteria, intestines-friendly bacterial cultures that foster a healthy colon, and even lower the risk of colon cancer. Lactobacteria, especially acidophilus, promotes the growth of healthy bacteria in the colon and reduces the conversion of bile into carcinogenic bile acids. The more of these intestines-friendly bacteria that are present in your colon, the lower the chance of colon diseases. Basically, the friendly bacteria in yogurt seems to deactivate harmful substances (such as nitrates and nitrites before they are converted to nitrosamines) before they can become carcinogenic.
Secondly, yogurt is a rich source of calcium – a mineral that contributes to colon health and decreases the risk of colon cancer. Calcium discourages excess growth of the cells lining the colon, which can place a person at high risk for colon cancer. Calcium also binds cancer-producing bile acids and keeps them from irritating the colon wall. People that have diets high in calcium (e.g. Scandinavian countries) have lower rates of colorectal cancer. One study showed that an average intake of 1,200 milligrams of calcium a day is associated with a 75 percent reduction of colorectal cancer. As a survivor of colon cancer, I have a critical interest in the care of my colon. My life depends on it.
3. Yogurt improves the bioavailability of other nutrients. Culturing of yogurt increases the absorption of calcium and B-vitamins. The lactic acid in the yogurt aids in the digestion of the milk calcium, making it easier to absorb.
4. Yogurt can boost immunity. Researchers who studied 68 people who ate two cups of live-culture yogurt daily for three months found that these persons produced higher levels of immunity boosting interferon. The bacterial cultures in yogurt have also been shown to stimulate infection-fighting white cells in the bloodstream. Some studies have shown yogurt cultures to contain a factor that has anti-tumor effects in experimental animals.
5. Yogurt aids healing after intestinal infections. Some viral and allergic gastrointestinal disorders injure the lining of the intestines, especially the cells that produce lactase. This results in temporary lactose malabsorption problems. This is why children often cannot tolerate milk for a month or two after an intestinal infection. Yogurt, however, because it contains less lactose and more lactase, is usually well-tolerated by healing intestines and is a popular “healing food” for diarrhea. Many pediatricians recommend yogurt for children suffering from various forms of indigestion. Research shows that children recover faster from diarrhea when eating yogurt. It’s good to eat yogurt while taking antibiotics. The yogurt will minimize the effects of the antibiotic on the friendly bacteria in the intestines.
6. Yogurt can decrease yeast infections. Research has shown that eating eight ounces of yogurt that contains live and active cultures daily reduces the amount of yeast colonies in the vagina and decreases the incidence of vaginal yeast infections.
7. Yogurt is a rich source of calcium. An 8-ounce serving of most yogurts provides 450 mg. of calcium, one-half of a child’s RDA and 30 to 40 percent of the adult RDA for calcium. Because the live-active cultures in yogurt increase the absorption of calcium, an 8-ounce serving of yogurt gets more calcium into the body than the same volume of milk can.
8. Yogurt is an excellent source of protein. Plain yogurt contains around ten to fourteen grams of protein per eight ounces, which amounts to twenty percent of the daily protein requirement for most persons. In fact, eight ounces of yogurt that contains live and active cultures, contains 20 percent more protein than the same volume of milk (10 grams versus 8 grams). Besides being a rich source of proteins, the culturing of the milk proteins during fermentation makes these proteins easier to digest. For this reason, the proteins in yogurt are often called “predigested.”
9. Yogurt can lower cholesterol. There are a few studies that have shown that yogurt can reduce the blood cholesterol. This may be because the live cultures in yogurt can assimilate the cholesterol or because yogurt binds bile acids, (which has also been shown to lower cholesterol), or both.
10. Yogurt is a “grow food.” Two nutritional properties of yogurt may help children with intestinal absorption problems grow: the easier digestibility of the proteins and the fact that the lactic acid in yogurt increases the absorption of minerals. And even most picky-eaters will eat yogurt in dips and smoothies and as a topping.
Let me know what you think by leaving a comment!
I love to hear from my readers!
Join my Newsletter here & receive
“Five 20 Minute VegFusion Recipes Your Family Will Love”
for free!